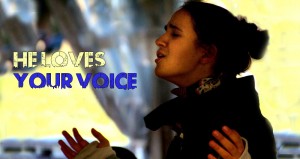 “Release your voice” has become a common phrase around the David’s Tent office over the past couple weeks. It’s been something that the Lord has been challenging us on as a community. He’s been speaking to us that it’s time to make some noise, share what God has placed inside of us individually and stop being silent! It’s much easier sometimes to stay quiet and not share our thoughts, feelings and ideas, but God has placed inside each of us a voice that we need to use. The Lord loves to hear our voice! It’s time to stop the silence.

The application of this concept has looked different for everybody on our staff. For some it means literally speaking louder throughout their day, for others it means that they step out with a prophetic chorus in the prayer room and for me–it’s looked like writing. I’ve known for awhile now that the Lord has called me to be a writer but I never actually did anything about it. I never really wrote anything. I would feel paralyzed when I got to the point of starting to write and for some reason I couldn’t actually do it. Even though I knew it was what I was called to. This was so frustrating for me, as you can probably imagine! How was I supposed to move past it and actually become a writer? Well, the Lord has his ways. :) This blog actually has been one of the ways that the Lord has gotten me to write! It’s been a great method to get me to sit down and formulate my thoughts onto paper. I’ve found my ability to write more freely has increased since I began to regularly write about something–anything! But the real breakthrough happened for me  one day in the prayer room.

One afternoon in 0ur 24/7 prayer room the Father showed me that  I was believing lies about my voice. Lies such as “I don’t have any good ideas,” and “Even if I do, no one will want to read what I have to say.” As he revealed the lies to me I began to repent and ask the Lord’s forgiveness. And let me just say, there is SO MUCH freedom in repentance! The next thing I knew I was standing on top of a chair in the prayer room declaring in a loud voice  “I HAVE A VOICE! I AM A WRITER! I HAVE GREAT IDEAS!” And in that moment, I got my breakthrough! Last night for the first time in a long time, I sat down and wrote something just for fun. It was just a fun little essay and may not have seemed like a big deal to most, but to me it was a huge breakthrough! Thanks, Jesus! :)  It’s one more step for me in releasing my voice! I won’t be silent anymore! This girl is going to write!

I challenge you to release your voice and step out in faith. Now is the time to let our voices be heard!

Join us this fall as we raise our voices in worship at the White House Ellipse. September 24- November 5.